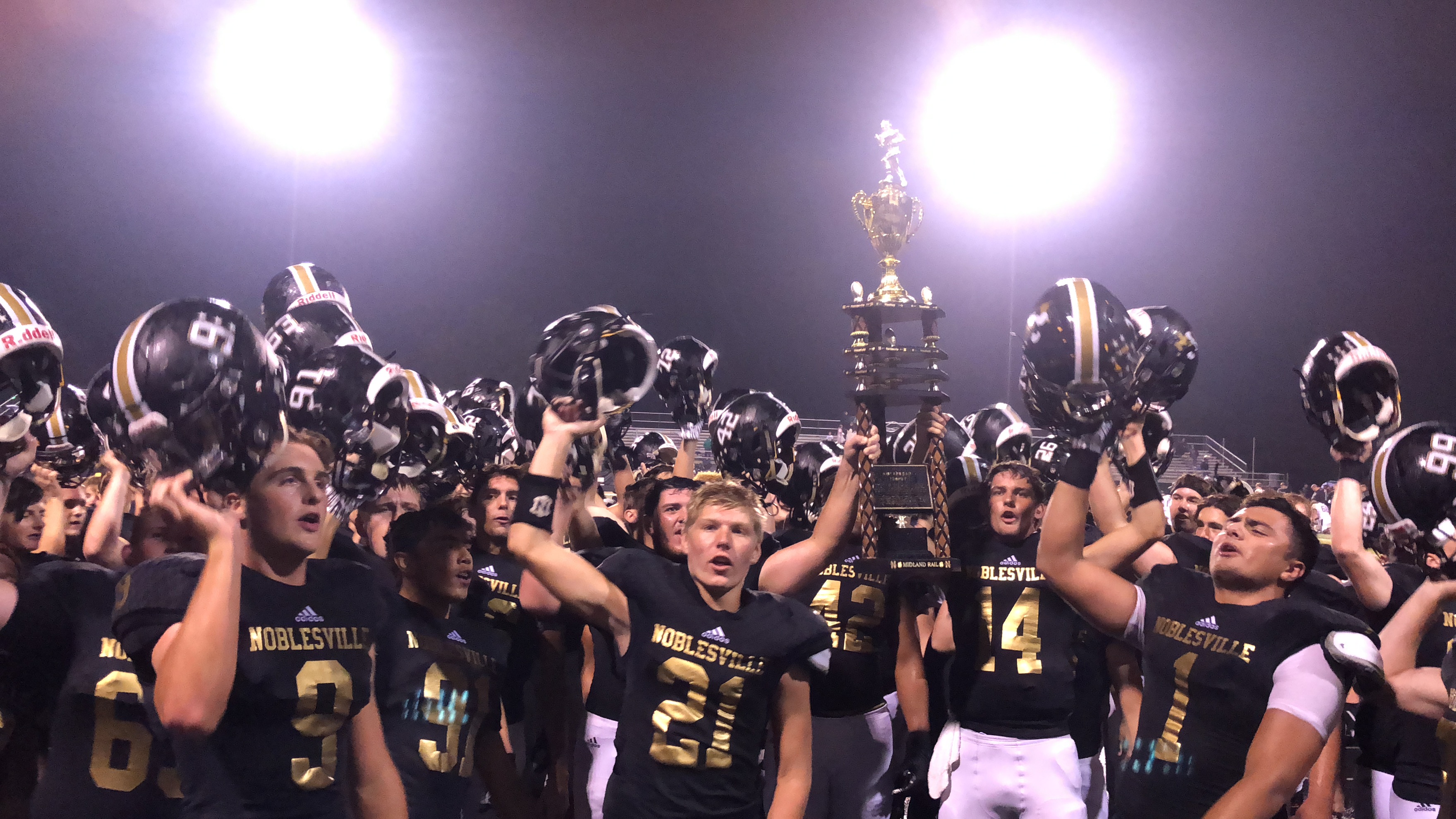 By CRAIG ADKINS
It wasn’t easy to pinpoint prior to the Friday night’s game exactly what each team’s offensive focus would be. With it raining all day in Central Indiana, Noblesville and Westfield would both put their running games to the test. On a wet, drenched Beaver Materials Field’s turf, it would be Noblesville that would prevail with a 10-2 home win over Westfield.

For the first time in three seasons, Noblesville football gets to keep the Midland Rail trophy in their possession. The last win in the storied series was a 17-12 win during the 2014 season. This win over Westfield also marks the first time since 2013 that the Millers have gotten themselves off to a 2-0 record in Hoosier Crossroads Conference play.

On the second play from scrimmage, senior tailback Eddie Dziennik ran a dive right into the pile off of the left guard. As soon as the he got to the line, Dziennik spun half a turn toward the outside and found himself out into the open and up the home sideline for a 75-yard touchdown run that gave Noblesville a 7-0 lead, less than a minute into the game.

“The funny thing about Eddie, he’s had a leg injury since the pre-season against Warren in one of our scrimmages and he has played through it,” said Noblesville head coach Justin Roden on his senior tailback.

“We’d love him to get more carries, because he’s a really good runner. We’re balancing the carries between he and Blevins a little bit tonight. He is a little shorter when he gets inside that pile like that, it’s easy to lose him,” Roden continued on Dziennik and how he got loose to score.

That’s exactly what happened on the lone touchdown of the night. When Dziennik busted through the hole, he fooled and lost everyone. Nobody knew he had the ball until he was all alone on his way to the end zone.

Westfield’s punt return defense was responsible for the two Shamrock points on the scoreboard. During a constant downpour of rain, the punt snap to punter Jack Knight, deep in his own territory, slipped off his hands and he was tackled in the end zone for a safety, cutting the Miller lead to 7-2.

After the ensuing Noblesville kickoff back to Westfield, Wyatt Blades picked off Camden Simons at the Shamrock 34.

A few plays later, Jack Knight booted through 30-yard field goal that would prove to ultimately be the final score of 10-2.

The next Westfield drive, junior tailback Eli Patchett had the ball knocked out of his hands and Blades dove on it at the Westfield 37. After gaining no yards on three plays, Knight attempted a 54-yard field goal that only landed five yards into the end zone.

With two teams that center their offenses around their running game, the rain wasn’t going to be a factor for either game plan.

“These are true running teams, so neither of us are scared to play in the rain, I guarantee you. They were just better than us tonight,” said Westfield head coach Jake Gilbert on Noblesville getting the best of his team, weather aside.

The Shamrocks’ first series of the third quarter turned out the same as their last full possession of the second. Blades stepped in front of Kyle Pepiot and intercepted another Simons pass, his second of the game.

“You can’t turn it over three times, so in a field position game like this, field position matters,” said Gilbert on how costly his team’s four turnovers were.

It was the middle of the fourth when Noblesville pretty much sealed the fate of the game. Westfield was driving down the field and with a 1st-and-10 at the Millers’ 38 and Simons decided to throw over the middle and he was picked off by senior cornerback Zach Gruver.
Westfield wasn’t able to get anything going offensively, gaining just 70 yards on 33 carries for a 2.1 average.

“When you get shut out, you pretty much played bad offensively,” said Gilbert on his offense’s dismal performance.

Noblesville’s great defensive play continued from last week at Fishers and right into this game with Westfield.

“I believe that’s eight quarters now that we haven’t given up a touchdown,” said Roden, commending his defense as it started conference play.

“The scheme that we’re playing, it’s a ‘bend, but don’t break’ defense, but it’s also a defense one that requires you do one job,” Roden on his defense philosophy that’s on the front of his playbook.

The Miller defense took the Shamrock offense completely out of their comfort zone by forcing four turnovers and ultimately stopping them the entire game. The same running game that ran for 345 yards and five scores last week vs. Zionsville was limited to just 70 yards on 33 rushes.

“We’re not the sexiest team to watch. We’re trying to be fundamentally sound and try to make people beat us,” said Roden on his team’s play overall and how it’s translated into two consecutive victories.

Eli Patchett led the Shamrocks with 20 carries for 50 yards and also caught three passes for 38 yards out of the backfield. Patrick Beam caught two for 31, Levi Kaster snagged two for 26 and Dane Wheeler two for 24.

The Miller offense showed signs that it is starting to come alive. Dziennik led with a game-high 92 yards on eight carries, including his 75-yard TD. It was an improvement, as the Millers gained 178 yards as a team on 36 carries. Senior Luke Blevins ran 21 times for 74 yards, but it was the good surprise of Dziennik who gave the Millers’ rushing game the spark that was needed.