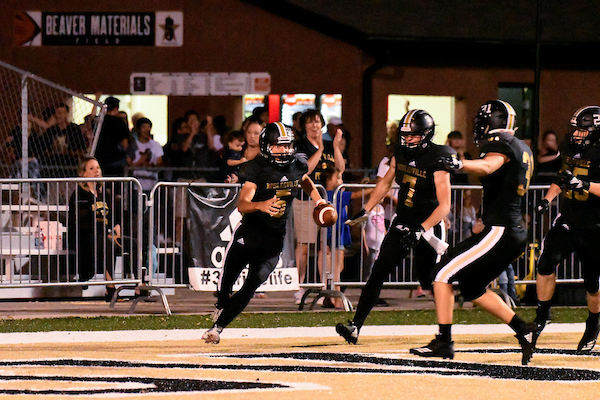 By CRAIG ADKINS
When it comes to high school football and the school’s homecoming, everyone tends to get hyped up about that particular game more than most weeks. Friday night was Noblesville’s 70th football Homecoming and would be one to remember, for numerous reasons.

The Noblesville athletic department honored the football classes from 1969 and 1992 for their 50th and 25th year team anniversaries and they also crowned the homecoming royalty with senior Natalie Grubb being crowned as the 2018 Queen and senior football standout Dalton Davis crowned King.

With all of the festivities throughout the week leading up to the game, the Noblesville Millers were able to stay focused and finish the week off with a defensive blanking of the visiting Franklin Central Flashes at Beaver Materials Field on Friday night, 10-0.

Noblesville head coach Justin Roden also was celebrated by his family following the win over Franklin Central, as they had a family photo opportunity with signs made to celebrate the first-year Miller coach on his 50th career win as a head coach. Roden was 47-20 at East Central in five seasons prior to coming to Noblesville.

It was a game that would have the feel of a chess match throughout. On paper and on the field, this was a very evenly matched game that would had the feel that it would more than likely come down to who made the least amount of mistakes and who took advantage of opportunities right in front of them.

Trading punts with each other on the first two series of the game, it was Noblesville’s second possession where they were able to break through and put the first points on the board. The Millers drove down to the FC 18 and relied on the leg of senior kicker Jack Knight as he booted a 35-yard field goal for a 3-0 Noblesville lead midway through the first.

“The penalties were just deflators. I thought we were blocking really well in the beginning. We were driving the ball,” said Noblesville head coach Justin Roden on how crucial penalties were at the start of the game.

The Millers were in the Flashes’ territory at the 33, driving down the field. Moments later, quarterback Grant Gremel dropped back in the pocket to pass and the football slipped out of his hands and was recovered by Franklin Central defensive end Steven Edwards at the 33.
Penalties and turnovers are what kept Noblesville from putting more points on the scoreboard than they did.

The Miller ground game was working and Gremel was trying to get the passing game worked into the mix. He had an open Jayden Barrett, but the ball tipped right off of Barrett’s hands and into the diving outreach of Aidan Ewers for the second turnover of the second quarter for Noblesville.

Homecoming king Dalton Davis came up big with Franklin Central having their best series of the game. With a fourth and seven at the Miller 33, Davis came flying up the middle, chasing down quarterback Dylan Bishop, sacking him for a 13-yard loss, turning the ball over on downs.

“It’s hard to teach this, but we’re really trying to sell the kids that when our offense sputters or makes a mistake or turns the ball over, that instead of moaning, this is a chance for us to go back out there and make something happen,” said Roden on how he and his coaching staff are convincing the players that if the offense doesn’t produce, the defense can.

The Millers kicked off the third quarter to Malieki Parks, who had a decent kick return until the ball was punched out from behind. Kicker Jack Knight picked the ball up at the 35 and sprinted down the far sideline to the end zone for a touchdown.

Knight would send the point after kick through the uprights, giving Noblesville a 10-0 lead and what would turn out to be the final score.

“I’ve seen guys advance kickoffs before and run them in. I don’t think I’ve ever seen the kicker pick it up and run 30 yards like Bambi down the sideline,” said Roden on Knight’s touchdown on the opening kickoff of the third quarter.

“He can run. He might be our fastest player,” continued Justin Roden on the speed of his kicker.

Noblesville’s defense was able to force the Flashes into turning the ball over on downs one time in each the second through fourth quarters, which was a big key to the Millers’ win. Another huge positive was that they held the Flashes to 147 yards total offense, including limiting Dylan Bishop to 8-of-19 passing for 54 yards and Malieki Parks just 59 yards on 20 carries.

Noblesville (3-3, 3-1) upped its league standing, tying them for second with Avon. They’ll host an improving Hamilton Southeastern (3-3, 2-2) next week. The Royals won at home Friday over Zionsville, 30-14.

The Millers were led offensively by Luke Blevins with 93 yards on 20 rushes and as a team ran the ball 38 times for 153 yards, a four-yard average.