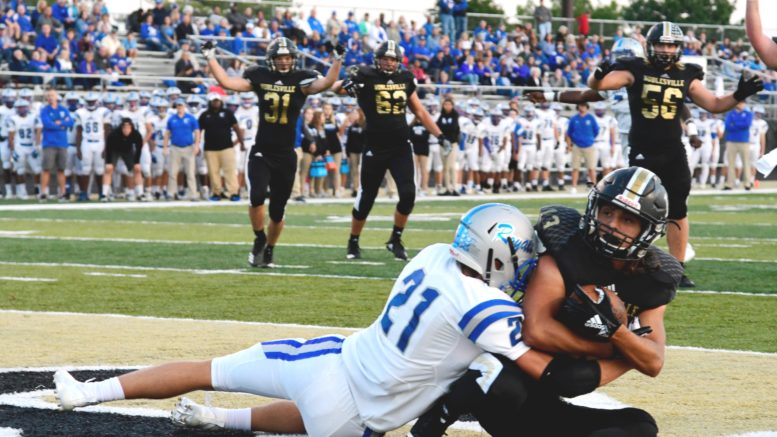 By CRAIG ADKINS
It was Senior Night for Noblesville at Beaver Materials Field on Friday night and that always has a special meaning for the players and the community. While it isn’t the final home game of the season, Noblesville will be on fall break when they host Avon in two weeks and the HSE game serves as the Senior Night game.

The Millers were in control from the start of the game and took advantage of numerous HSE miscues on their way to a convincing 21-7 win over the Royals on Friday night.

After trading punts the first few series of the game, Noblesville’s offense was able to sustain a solid offensive drive that took over five minutes off of the clock. Grant Gremel capped off the drive with a four-yard touchdown pass to Wyatt Blades for a 7-0 Miller lead.

The Royals then put together a good series of their own and it came down to a fourth down and three at the Miller 17. Kicker Mitch Hebenstreit missed a 34-yard field goal attempt wide left.

HSE would get the ball back after a Noblesville punt and once again in the second quarter, the Royals were in prime position to tie the game. Instead, junior QB Kody Sparks threw on first and ten at the Miller 28 and was picked off in the end zone by Zach Gruver, his sixth interception of the season.

“We work really hard in the film room. I think for us, we’ve kind of changed the way we prepare for games,” stated Noblesville first-year head coach Justin Roden on his team’s game preparation.

“Our kids tonight, especially on defense, there wasn’t anything tonight that they hadn’t seen,” said Roden on the Miller defense and how they didn’t flinch at anything HSE brought at them.

The Miller defense showed up early and often and set the tone from the opening kickoff, limiting the Southeastern offense, but more importantly, keeping them off of the scoreboard as long as they possibly could.

“They’re good. They came out and did stuff a little bit different than we thought and I thought they schemed us pretty well,” said Morris on the Millers’ offensive effort against his Royals’ D.

“I don’t think they really gashed us, but we gave up a couple long runs, but overall, we just didn’t play well enough to win,” said Morris, who was disappointed, but complimented Noblesville’s efforts in beating his Royals.

Noblesville received the third quarter kickoff and didn’t waste any time to get their second score of the night. First play from scrimmage from the 34, senior tailback Luke Blevins had a highlight reel run on Senior Night that he’ll never forget. Blevins ran right into the pile and bounced himself outside his left tackle and was all alone to the end zone down the HSE sideline for a 66-yard touchdown run, putting the Millers up 14-0 just 19 seconds into the second half.

After a couple more drives for each offense ending in punts, HSE found their offense in a hole and forced to punt again. This time, Noblesville’s special teams came up big. Eddie Dziennik busted around the outside and blocked the punt by Mitch Hebenstreit. Justin Johnson-Sparks picked up the ball at the 12 and raced into the end zone for a touchdown and the Millers now stood tall at 21-0, late in the third.

It wasn’t until the middle of the fourth that Hamilton Southeastern was able to finally put together a drive that resulted in points.

They marched confidently down the field, but it would wind up being too little, too late. Kody Sparks tossed a touchdown pass to Jackson Lantz from six yards out that would account for the final score of 21-7, a Senior Night victory for Noblesville.

“At the end there, we kind of mentally broke down, because we kind of got happy. You know, it was 21-0. We haven’t been up on anybody like that and so we kind of felt good about ourselves,” said Roden, who was disappointed his defense gave up a touchdown in the fourth.

Noblesville did what they had to do in limiting the yardage of a dangerous tailback in Matt Harris, who came into the game averaging 5.7 yards per carry. The Millers held Harris in check for the most part, allowing 118 yards on 30 carries.

They also forced HSE into passing the ball, which wasn’t able to produce like the Royals had hoped. Sparks finished 15-of-29 for 87 yards with a TD and an INT.

There were also offensive improvements for Noblesville. It seemed like a much more confident Grant Gremel, but that confidence is a direct result of winning.

Gremel went 8-for-14 for 54 yards and a TD on the night, but mainly was poised and confident throughout in orchestrating the Millers to the win.

“We didn’t turn it over tonight. We’re a lot better than we were those first two weeks,” said Roden, talking about how much his team has improved since opening the season with consecutive losses to Cathedral and Carmel.

Noblesville improved their season overall with their fourth win in five HCC games. On a historical note, this is the first season in Miller football history that the team has defeated Fishers, Westfield and Hamilton Southeastern.

Hamilton Southeastern (3-4, 2-3 HCC) hits the road next week as they’ll try to keep Franklin Central winless in HCC play. The Flashes dropped to 0-5 in the league, losing at home to Fishers on Friday, 17-12.

Noblesville (4-3, 4-1 HCC) improved its season and will hit the road next week and face conference leader Brownsburg (7-0, 5-0). The 6A No. 2 Bulldogs won in a shootout with a basketball score at Zionsville, 70-52 on Friday.

Luke Blevins led the Millers with a game-high 135 yards on 22 rushes, highlighted by his 66-yard jaunt in the third.