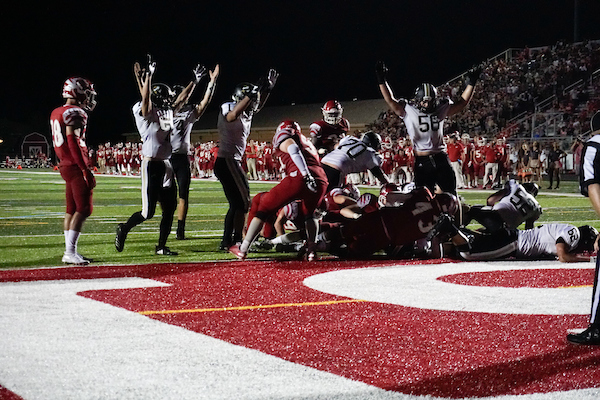 The Noblesville Millers picked up their first win of the season on Friday night, defeating the #14 ranked Fishers Tigers 21-9 in a Hoosier Crossroads Conference clash at Fishers High School.

After giving up first and second quarter field goals, the Millers were able to score just before halftime; Grant Gremel and Luke Blevins connected on a 23-yard touchdown pass.

The Millers’ defense played very strong in the second half, limiting the Tigers two one last field goal in the third quarter and forcing key turnovers.

Zach Gruver had two interceptions in the game, the biggest coming in the fourth quarter. With the Millers trailing 9-7 and the Tigers driving in Noblesville territory, Gruver picked off the Tigers’ pass at the 15-yard line and returned it 85 yards for a touchdown. Grant Gremel connected with Wyatt Blades for a two-point conversion for a 15-9 lead.

Justin Johnson-Sparks also had two interceptions in the game. The first coming with just under four minutes remaining in the game and led to an Eddie Dziennik one-yard touchdown run on the ensuing Millers drive. The Millers failed to convert on a two-point conversion. Johnson-Sparks’ second interception came on the next Fishers drive to seal the win for the Millers.

Noblesville will look to remain unbeaten in the HCC next week when they host the Westfield Shamrocks at Beaver Materials Field in Noblesville.