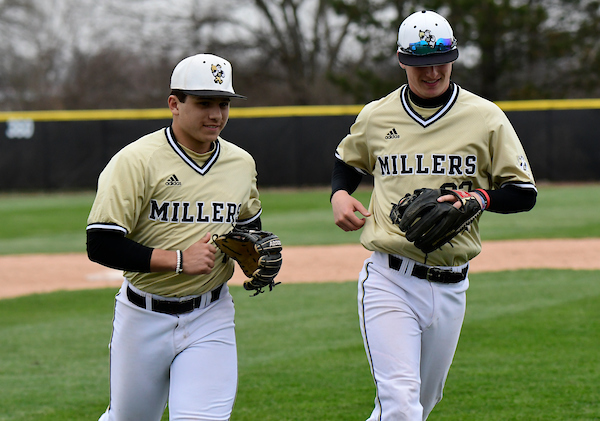 The Noblesville Millers got out to a seven-run lead in the fifth inning and held on for a 14-12 victory over Carmel on Monday in The Battle for The Oar.

Cade Nelis led the Millers to victory by driving in four runs. He went 3-for-3 at the plate. Nelis drove in runs on a home run in the first and a single in the third.

Noblesville got things moving in the first inning. Nelis drove in three when he homered.

After Noblesville scored one run in the top of the third, Carmel answered with one of their own. The Millers scored when Nelis singled on a 1-2 count, scoring one run. Carmel then answered when an error scored one run for Carmel.

Peek took the win for Noblesville. He allowed six hits and seven runs over two and a third innings, striking out two. Jared Michael and Grant Braun entered the game out of the bullpen and helped to close out the game in relief. Michael recorded the last four outs to earn the save for the Millers.

C Grzeskowiak took the loss for Carmel. He lasted one-third of an inning, allowing zero hits and four runs while walking one.

Noblesville tallied one home run on the day. Nelis went for the long ball in the first inning.

Noblesville saw the ball well today, racking up nine hits in the game. Nelis and Miles all managed multiple hits for the Millers. Nelis went 3-for-3 at the plate to lead the Millers in hits.

Carmel tallied 12 hits on the day. Brooks, J Rogers, U Logan, and Greene each had multiple hits for Carmel. Brooks led Carmel with four hits in five at-bats.