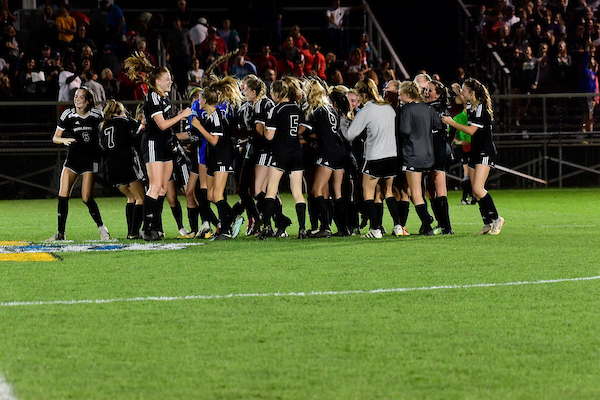 The #2 Noblesville Millers defeated the #1 Hamilton Southeastern Royals 2-1 in a state championship level game in the opening round of the IHSAA Girls Soccer State Tournament at White River Elementary Soccer Complex in Noblesville.

The Millers were on their game defensively throughout and were highlighted by several big-time saves from sophomore goalkeeper Makenna Mundy.

The Millers had few chances to score in the game, but they quickly capitalized on those chances in the second half.

In the game’s 45th minute, sophomore Jenna Chatterton took a pass from Sydney Anderson at midfield and flipped it skyward to freshman Makenna Maloy. Rather than gather the ball, Maloy sent a perfect one-touch pass that led Chatterton and the Royals’ backline on a race to the box where Chatterton took one dribble before putting the ball in the bottom left corner of the goal for a 1-0 Millers lead.

In the 54th minute, junior Carly Hudnall took a one-touch pass from Cecilia Goad to the left side of the box where she gathered her shot and scored from twelve yards out for the 2-0 lead.

The Royals got on the board in the 59th minute on a Molly Harris free kick that slipped through Mundy’s hands and into the goal to cut the Millers’ lead to 2-1.

Mundy, however, wouldn’t let any other opportunity slip through her hands. In the 73rd minute, Hamilton Southeastern’s Ava Keaffabor directed a beautiful shot that required Mundy to utilize every inch of her height to get the ball and preserve the lead for the Millers.

The win sends the #2 Millers to the Sectional Semi-Final round where they will play the #9 Fishers Tigers on Thursday at 5:30 p.m. at White River Elementary Soccer Complex in Noblesville.