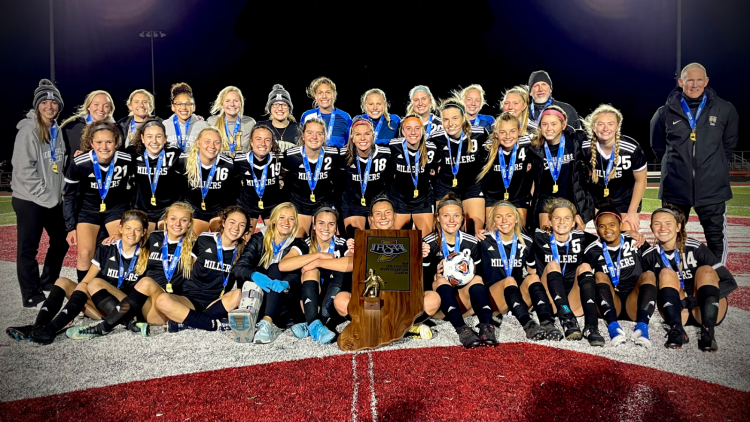 The Noblesville Millers ran away with the 2020 Indiana 3A state championship on Saturday night at Fishers High School, defeating the Guerin Catholic Golden Eagles 3 – 0 to earn their second consecutive state championship title and the program’s third overall.

In the 24th minute, Jacey Hoopingarner sent a ball into the box that slipped through the Guerin Catholic goalkeeper’s hands. Carlie Sack was in the right place at the right time to send in a memorable first varsity goal to give the Millers a 1 – 0 lead that would last through halftime.

During the 47th minute, Makenna Maloy sent a corner kick to Isabella Griffey, who slyly kicked it behind her with her heel for Ava Bramblett to drive home a 2 – 0 lead.

Senior Jenna Chatterton capped off her influential Miller career with a goal in the 63rd minute after stealing a Guerin Catholic pass and driving the ball into the box, where she blasted home the game’s final goal past the diving goalkeeper for the final 3 – 0 winning margin.

The Miller defense did what they’ve done all season long and stymied several Guerin Catholic opportunities. In the rare moments that the Golden Eagles did break through, goalkeeper Sara Kile was there to deny them each time and preserve the shutout.

During the 2020 season, the Millers outscored their opponents 54-5. The five goals allowed was the second fewest in program history. The 2008 Millers did not allow a goal all year, eventually falling in the State Finals’ “Final Four” in a PK shootout.

The Millers finished the 2020 season with a 17-0-1 overall record and are currently on a 38 match unbeaten streak, which is three shy of the program record. The team claimed a conference-leading 12th Hoosier Crossroads Conference Championship and earned the program’s third state championship.

The Millers are the first program in the brief IHSAA 3A Girls Soccer history to repeat as 3A state champions. 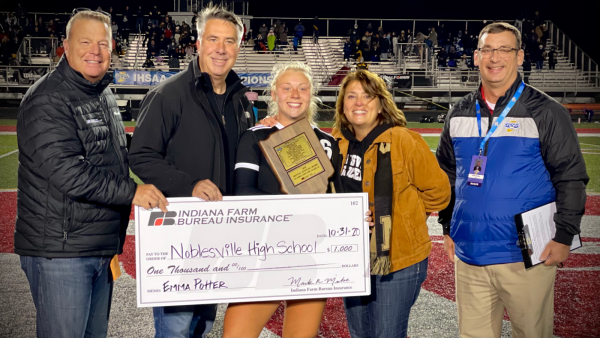 Miller Soccer’s dominant victory wasn’t the only cause for celebration for Noblesville High School on Saturday night. Senior Emma Potter was named the IHSAA Mental Attitude Award Recipient for 3A Girls Soccer after the game. The award is presented to a senior, nominated by their principal and coach, who excels in mental attitude, scholarship, leadership, and athletic ability in soccer.

It is the 8th time a Noblesville student-athlete has been named a Mental Attitude Award recipient and the first since 2008 when Amy Albright earned the award at the gymnastics state finals.